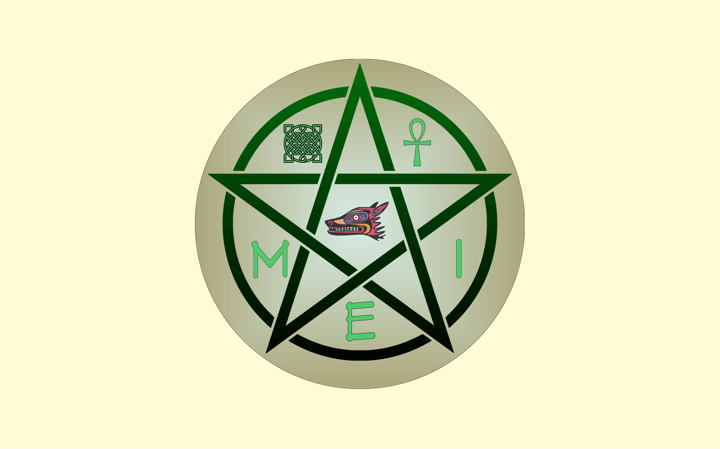 The pentacle is a five-pointed star, or pentagram, contained within a circle. The five points of the star represent the four classical elements, along with a fifth element, which is typically either Spirit or Self. To perform magic that cleanses or banishes things away, you would draw the pentacle starting at the top point, and going down to the lower right, then the upper left, cross to the upper right, and then the lower left and back up. To perform magic that attracts or protects, you would still start at the top point, but go down to the lower left instead, reversing the process.

It is the Amerindian symbol for the Trickster that alternately assumes the form of an actual coyote or a man. The Coyote is the keeper of magic, and is a teacher and creator. He denotes both folly and wisdom and the balance of the two. It is a powerful symbol in local Mexican lore. The coyote uses deception and humor to rebel against social conventions. The animal was especially respected in Mesoamerican cosmology as a symbol of military might.

The Celtic shield knot is used for warding and protection. Shield knots have appeared in cultures around the world and have taken a variety of different forms. They are almost universally square in shape, and the knotwork of the design ranges from simple to complex. In the Celtic version, a series of knots is formed.

The ankh is the ancient Egyptian symbol of eternal life. According to The Egyptian Book of Living and Dying, the ankh is the key to life. One theory is that the loop at the top symbolizes the rising sun, the horizontal bar represents feminine energy, and the vertical bar indicates masculine energy. Together they combine to form a symbol of fertility and power.